The following information comprises extracts from "The Clydesdale Horse".

A Resource Book published by the CCHS (NSW Branch) in addition to the Foreward of the first CCHS Stud Book.

"Exactly when the first importations of heavy horses into Australia were made is not clear, ...however, ... in the early days of settlement of New South Wales, pioneers essayed to bring horses for draught purposes to these shores despite the difficult transport conditions then met with."

One of the earliest references to the introduction of heavy horses was made by James Atkinson, in his work titled, The State of Agriculture and Grazing In New South Wales, published in 1826. He wrote:-

Some stallions and mares of the English and Flemish cart breeds have lately been introduced. The purebred horses of this description are certainly too heavy for the climate, but it is probable that, by judicious crossing with the lighter kinds, a breed may be obtained with sufficient bone and strength, but yet not too heavy, for the purposes of draught in this climate, which, (Mr Atkinson added) seems peculiarly congenial to the breeding and improvement of horses.

In Tasmania, ... the English dray horse appears to have predominated ... Victoria, in its early days of settlement, secured its foundation in draught stock mainly from Tasmania and New South Wales, to be later followed by importations from England and Scotland. English horses were also introduced into Western Australia late in the 1830’s and some were also imported to South Australia.

"It was not, however, until the 1850’s, following the discovery of gold in New South Wales and Victoria, that draught horse breeding received its greatest impetus.

The main draught horse breeding centre in New South Wales was the Hawkesbury Valley, near Sydney... When the Clydesdale was introduced into the district it was some years before the breed received much encouragement, but, in time, it gradually superseded all other heavy breeds. In Queensland, the Clydesdale was brought prominently to the front ... in or about 1855."

"The establishing of a stud book for Draught Horses in Australia was first considered by the Council of the Royal Agricultural Society of Victoria as far back as 1885.

No definite action was taken until October 1903, when that Society appointed a committee to report on the matter." 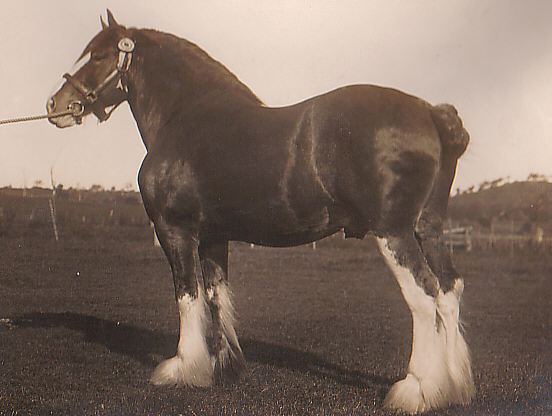 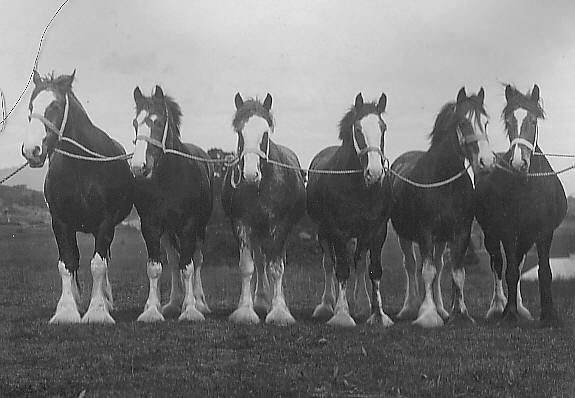 The greatest progress and development of the Clydesdale horse in Australia, has, however, taken place in the 30 years up to 1936 ... to the almost complete elimination of other draught breeds ...

Much credit is due to those enterprising breeders who maintained their faith in the Clydesdale horse and who, in spite of the decline in horse breeding following the Great War, not only preserved their studs, but improved them through the introduction of fresh sire blood."

In 1904, the committee due to report on the establishment of a stud book for Draught Horses in Australia recommended the publication of a Draught Horse Stud Book for Victoria, to include Clydesdales, English Shires and Suffolk Punches - each breed to occupy a separate section of the book.

The Council of the Society adopted the committee’s recommendation, but subsequently amended the conditions of registration, and altered the title of the book to The Draught Horse Stud Book of Australia so that horses in other States could be registered.

On the 1st of November 1917, it was decided to recommend ... that the Australian Clydesdale Horse Society’s Stud Book and the Clydesdale section of the Draught Horse Stud Book of Australia, be amalgamated. It was further resolved to recommend that a new controlling body be established ... the new controlling body being named the Commonwealth Clydesdale Horse Society ... The first meeting was held in Melbourne on 24th July 1918 ...

It was unanimously agreed that the standard for stallions should be "four top crosses" and for mares "three top crosses" of Clydesdale breeding, which were the regulations governing registration in the Australian Clydesdale Stud Book ... at a meeting in Sydney in March, 1921, ... Rules and Regulations were adopted, and it was decided that entries for the first volume of the Commonwealth Clydesdale Stud Book should close on 30th September 1921. ... Captain A. E. T. Payne (President of the Victorian Branch) was unanimously elected first President of the Society ... Following this meeting, the Society was accorded the hearty support of Clydesdale enthusiasts throughout the Commonwealth." 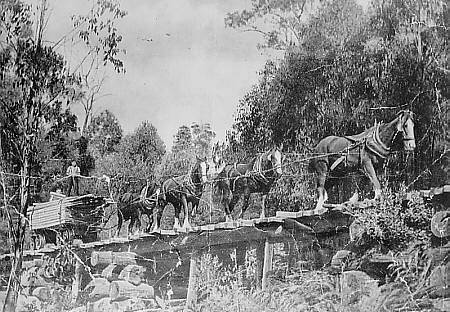 "Australia ... has always trailed the rest of the world in breeding trends, and the peak of Clydesdales here was not reached until the mid 1930’s, some 25 years after Great Britain...

Australia carried on the tradition of breeding for the best. Australia’s slowness to change from horsepower to petrol, resulted in a building up of good quality Clydesdales...

In the decade leading up to World War II, competition was very keen in the show ring, with many imported horses from Scotland and New Zealand and their progeny together with well-bred local horses providing big classes of quality horses...

The declaration of War in 1939 was a retrograde step for heavy horse breeding; prices fell off quickly and most shows ceased showing Clydesdales...

Melbourne Show was again held for the first time post-war in 1946..."

"The fifties and sixties were dark years for the horse...

The horse market was in the doldrums and good horses were sold for a pittance... . By the late 1950’s Draught Horse values dropped to rock bottom. About this time some Australian breeders claim they saw quality mares almost given away. A turning point came late in the 1960’s when interest slowly increased in the heavy horse..."

Since 1970 there has been a resurgence of interest in the Clydesdale horse in Australia. The use of Clydesdales in brewery teams around Australia has greatly increased the profile of the breed.

The pleasure and experience of owning and working this magnificent horse has seen the introduction of many new converts to the breed. The numbers of exhibitors at local shows have been on the increase and more working classes are appearing in show schedules. Most recently ridden Clydesdales have been a main feature at many Royal and local shows.

The annual Membership of the Society is approximately 700 members distributed across 5 state branches.

Bi annually the Society produces a Stud Book record of the breeding, transfers and deaths of the horses as well as an inventory of Members.

The 39th stud book published during 2016 is available for purchase from the Federal Office. The total number of horses registered in Australia since the start of registrations in 1924 up until 1st August 2016 is 9347 Stallions/Geldings and 19068 Mares.

State Branches conduct annual events promoting the breed and on a rotation basis the Max Fowler Award is held for the best Gelding. This Federal Council award was created in memory of one of our long serving breeders and judges the late Mr Max Fowler.

Please refer to the events page which will contain details of the shows and activities held in each state.

The 2018 year is the 100th year of the Society. The Society intends to run special events to celebrate the milestone and a memento will be struck in recognition of this occasion.

Copies of the resource book and past stud books are available from: